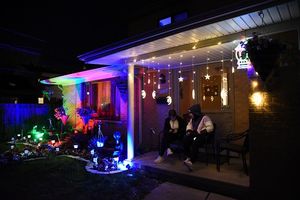 Halal Metropolis is a travelling series of exhibitions by artist Osman Khan, photographer Razi Jafri, & historian Sally Howell, that explores the facts, fictions and imaginaries of the Muslim population(s) in Detroit and Southeast Michigan as viewed through historical/archival research, documentation of current conditions, and explorations of future desires. The UM- Dearborn installation in the Stamelos Gallery Center will highlight the role that food, fashion, and holiday celebrations have played in augmenting Muslim visibility in the region. The Halal Metropolis alludes to the established and growing Muslim population in Detroit and its metro area, one of the largest and most diverse Muslim populations in the U.S., whose visibility is both pronounced and extremely present in the city, yet whose narrative seems unusually silent in the larger Detroit story. The exhibition moves beyond wanting to simply illustrate or document the current state of this halal metropolis into exploring the congruent and contradicting ideas, aesthetics, and cultures working to make the halal metropolis both a real and imaginary entity. Overall, the exhibition addresses the ambiguities and realities of the halal metropolis. The installation is conjured as a modular, traveling installation that adjusts and adapts to the different socio-political contexts and gallery spaces of the metro Detroit region. Each installation addresses local histories of inclusion and exclusion, of aesthetic adaption and accommodation, and of the cultural and economic growth of Muslim and non-Muslim communities alike. In 2020 Halal Metropolis is scheduled for the Stamelos Gallery Center in Dearborn, the Stamps Gallery in Ann Arbor, and the Anton Art Center in Mt. Clemens. The exhibition is accompanied by a robust series of public programming centered around the different aesthetic, cultural, and political practices that make Muslims visible in Detroit. These community conversations take many forms, including cultural events, lectures, design charrettes, workshops, performances, food and hospitality events, demonstrations, hands-on maker events, lectures, etc. Each is designed to engage and challenge the assumptions of diverse audiences.