Once a month, Amara Vear surveys the collection of staged books and comics from the two bookshelves that tower over their office. They pack the books into 12 to 15 banker’s boxes and load them in their car with three tables and multiple stands. Then they set off to Bridge Community Café in Ypsilanti to set up their pop-up shop, Queer Comics Peddler.

Queer Comics Peddler sells LGBTQA+ books, comics, and zines. It recurs monthly starting in July, on the third Saturday at Bridge Community Café from 10 a.m. to 5 p.m. With help from their two friends, Vear also takes the pop-up to multiple pride month events across the state.

Vear founded the business in 2018 after gaining confidence and organization skills from their role as president of Spectrum, one of the LGBT caucuses at Michigan State University.

“I also have had a lot of love of comics when I was younger and it seems like many of the cartoonists I followed then have come out as LGBT since and are making the representation that we were all looking for when we were kids,” Vear said.

Vear said following the 2016 election there was “a lot of emotional exhaustion and fear, especially in the queer community.” They hope that the comics’ LGBT representation will raise awareness about the community.

“I’m hoping, essentially, that the stories that come out will make people a little bit more empathetic and also a little more hopeful for the future,” Vear said.

Although some people assume that comic books aren’t strong literary material, Vear disagrees. They said reading comics allows people to build a connection between visual and textual information. They also appreciate how easily consumable comics can be, especially for people who are too busy to read long novels.

“I find that to be a really big plus in a world where I think we’re kind of bombarded with things to occupy our time and take our time, so this makes it simpler for people to reach these stories and accept them,” Vear said.

“This little kid was very geared up, (saying) ‘What can I do to help support my friend?’” Vear said. “I found that to be just heartwarming.”

When popping up at pride events or the café, Vear asks customers if they’d like to browse or if they’d like “the tour.” The shop is sectioned off by age and interest or story type. There’s a section for ages 0 through 8 with board books and children’s books. The middle school section has coming-of-age material and fantasy. The teenage section is similar with some sci-fi scattered throughout. Adult comics are on higher-up shelves in the “grown-ups only” section.

Vear also recommends books that cater to people’s interest. The customers can vary from parents wanting to learn about their childrens’ identities, older folks, or kids excited to see representation of them and their friends in literature.

“If you are a newly-transitioned parent and you want to find something to help explain that to your children, I can provide children’s books that do that,” Vear said. “Maybe you’re an older gay man and you’re looking for something that reflects your experiences, I can connect you to that too.”

Vear chooses their products through book distributors, recommendations, direct orders from cartoonists, and library books they enjoyed. They make about 30 sales at Bridge Community Café and about 80 to 100 sales at pride events.

“(My shop is) a whole bookshop that has the kind of representation that it’s hard to find at a lot of libraries or a lot of bookstores that aren’t specific for this,” Vear said.

Vear said kids and parents will often approach them with stories at the pop-up. Once, a middle school girl came up to Vear and said she was excited to find stories that had transgender representation because their friend at school is transgender.

“This little kid was very geared up, (saying) ‘What can I do to help support my friend?’” Vear said. “I found that to be just heartwarming.”

When Vear was younger, they identified as questioning and wasn’t sure where they fit in with the queer community. Their friend came out to them as transgender after reading a book titled “Luna” that helped validate their experience. That’s when Vear realized the power that LGBT representation in books could hold.

“I just saw the growth that happened and the confidence they gained when (my friend) realized ‘Oh, there is a place for me in this world,’” Vear said.

Vear hopes, after reading their comics, people have the desire to create their own stories and realize that they aren’t alone. 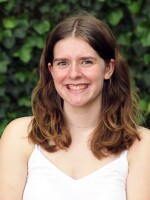