Central Michigan University pushes back against allegations of racial discrimination

The president of Central Michigan University said Thursday he believes discrimination claims against the school will be shown to be unfounded. CMU is facing a federal investigation after complaints that its decision to eliminate men’s track and field discriminated against black athletes.

CMU says it eliminated men’s track and field in 2020 due to budget cuts. This fall, they’re replacing it with men’s golf. President Bob Davies said he is confident CMU golf will be diverse.

"The current golf team is being recruited. Right now I know of eight student athletes who have made a commitment. Three of them are students of color."

Davies said the decision to eliminate men's track and field was made largely based on three factors: A drop in the number of participants, fewer opportunities for competition in the MAC conference, and cost.

"To have a competitive track and field team, the cost is at least a million dollars. In the MAC conference, for competitive golf is about half of that."

The discrimination complaint was filed by activist Russell Dinkins with Tracksmith Foundation, a non-profit arm of a running apparel company out of Boston. He says golf has lower participation numbers than track and field.

"In order for the golf programs to afford the same degree of opportunity that the track and field program had offered, the golf program would have to be 100 percent black for the next ten years"

CMU said when it eliminated the track program it had 30 participants. Three were African American, 3 were biracial, 2 were international students and 22 were white.

Dinkins said golf does not offer the same opportunities for athletes of color that track does. He said the fact that the U.S. Education Department initiated an investigation is relevant.

"An investigation, obviously, doesn’t mean that the university has been found at fault, but it is significant. Because the Department of Education believes that the information I provided had enough merit to warrant an investigation. They don’t have to do that."

Dr. Davies says CMU is complying with the investigation, and he’s confident the discrimination claims will be proven unfounded. 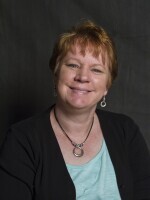 Amy Robinson | WCMU
Amy began working for WCMU in late-2006. She is the local host of All Things Considered, and WCMU's News Director. She is responsible for leading a team of reporters covering stories throughout WCMU's 44 county coverage area.
See stories by Amy Robinson | WCMU
Latest Stories
Related Content