Students at Kalamazoo Central High School demonstrated by Drake Road Wednesday to support a teacher who was on the third day of a weeklong hunger strike.

Josh Gottlieb, who teaches physics at the school, is protesting likely cuts to President Joe Biden’s plan for curbing greenhouse gas emissions. After going more than 50 hours without food, Gottlieb said was tired, and of course, hungry.

“I was telling some of these guys I could just destroy some Taco Bell right now, but it could be worse,” he said.

Gottlieb was seated while students walked by the road, gesturing for motorists to honk (many did). Many students brought signs urging action on climate change, including 10th grader Ciara Smith.

“It says, ‘act now or die later,’ Smith said, “And it says ‘it is all of our problem.’ And it shows a picture of a polar bear on a melting iceberg.”

Does Smith think Gottlieb’s crazy to go without food for a week?

Former K-Central student Patrick Darling stayed when the students had to go back to class. Darling said he read a news story about the Gottlieb’s hunger strike.

“I thought hmmm, well, someone’s got to keep him company,” Darling said.

Gottlieb said he was inspired by climate activists who launched an indefinite hunger strike near the White House about a week ago. 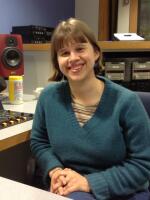