The Ann Arbor VA is opening its first independent women’s clinic. The development was announced in December at the VA’s annual women’s health town hall.

The clinic was made possible by years of advocacy from the veterans and the staff at Ann Arbor VA. The clinic itself is a part of a $6.5 million dollar renovation to the VA hospital.

Cheryl Allen is the women’s veteran program manager. She says the separate space for services was a direct ask from the community.

“These women told us what they wanted. They told us that they wanted a space to call their own,” said Allen. “They wanted an area where they didn't have to share the waiting room with other male veterans. They wanted this space. They needed that space.”

Brian Hayes is the VA’s Communications Director. He says this expansion is needed now more than ever because a growing number of the VA’s patients are women.

“It's the quickest growing population of veterans in the country. Right now in our healthcare system, just VA Ann Arbor, we're hovering right around 10% of our veteran population that come to the hospital are women.”

Krystal DuPree was one of the veterans who attended the town hall where the VA announced the clinic. She says she is excited about the new development.

“Being a woman veteran is very unique. We have shared experiences with our male counterparts, and then we have experiences that are completely different. I’m just looking forward to seeing what that space will turn into,” DuPree said. 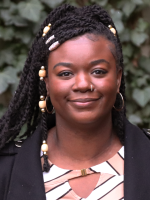 Jamie Simmons
Jamie Simmons comes to Michigan Radio as a new Community Engagement Reporter for the station’s Enterprise team. She is a macro social worker with a strong background in community engagement and communal dialogue.
See stories by Jamie Simmons
Latest Stories