This Week in Michigan Politics

Each Wednesday I check in with Michigan Radio's Political Analyst, Jack Lessenberry, for a round up of state politics.

This week Jack is on Mackinac Island (he's promising not to eat any fudge) for the annual Mackinac Policy Conference.

The 3-day conference is billed as a time for state business and political leaders to talk about and shape the state's future.

Lessenberry said they are talking this year about the comeback Michigan has been on. He says Governor Synder talked about how Michigan has the right to be proud of that fact.

"In some years people at the conference have been almost in the fetal position talking about some of the problems we've had," said Lessenberry. "This is an acknowledgment that people want to be more upbeat about the future."Lessenberry said very few people from Lansing are at the conference, because they are back working on the budget.

The legislature has a self imposed deadline of June 1st. He said "things seem to be moving along on the budget very well compared to some past years, other than last year when they wrapped up just about this time, but there are still some sticking points - the main one being higher education."

In other big news this week it appears Thaddeus McCotter - longtime Southeast Michigan Republican Congressman - is facing election-fraud allegations.  This is rocking the Michigan-political establishment.

"Nobody's every seen anything like this including me," said Lessenberry. The Secretary of State's office says many of the petitions submitted by the McCotter campaign appear to be photocopies. "He has a lot of egg on his face, and now he has to try to get on the ballot as a write in campaign." 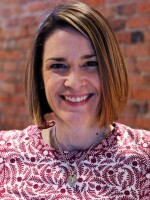 Christina Shockley
Christina began her career in radio at Michigan Radio while a student at the University of Michigan. She was a producer and researcher for The Todd Mundt Show, and then hosted Weekend Edition.
See stories by Christina Shockley
Latest Stories