The race for Michigan’s newly drawn 7th District could be one of the most competitive elections in the nation, and it's one that could determine control of the U.S House of Representatives.

Incumbent Democratic Congresswoman Elissa Slotkin is facing off in a tough race against Republican state Senator Tom Barrett. They’re both focused on courting voters who they haven’t represented before.

Congresswoman Slotkin is pitching herself as a bipartisan, independent voice in Congress with national security credentials.

Speaking at a campaign stop in Corunna, east of Owosso, in early October, she said she has a record of working in good faith with both Democrats and Republicans.

“At the end of the day, I think that people in this area still care about principles, that you have to have some guiding principles as a leader," Slotkin said. "And we want that in our leaders, even if we don't always agree with them.”

It's Just Politics: Michigan's congressional races to watch
We hear an interview with state Sen. Tom Barrett. Then Colin Jackson helms the show to talk about the competitive down-ballot races.

When Slotkin was first elected in 2018, she represented the 8th District, which covered Ingham, Livingston and parts of Oakland counties. After political boundary lines were redrawn last year, a new 7th District was created. It spans mid-Michigan from Charlotte to just west of Flint and some Detroit suburbs, and that’s the seat Slotkin is now vying for.

Potentially to her advantage, this area leaned slightly Democratic in 2020, and she has been known to attract Republican voters with moderate values. According to Michigan's Independent Citizens' Redistricting Commission, President Joe Biden won the new 7th District with 50.49% of the vote in 2020 compared to former President Donald Trump's 49.51%.

But Michigan State University political scientist Matt Grossmann says midterm elections tend to sway against the party in power. That could hurt her chances.

"Last time was a more Democratic-leaning national year than this time," Grossmann said. "She'll have to win in a district that is better for her but in an environment that may be worse."

Slotkin’s campaign has been barnstorming communities new to her to make her case to voters she doesn’t currently represent.

“We're having events like this. We're doing a lot more door knocking in those new counties, and just doing everything we can to reach out and ask people what they want out of their representative," Slotkin said. "It starts as a conversation.”

She says she wants to focus on lowering the cost of healthcare and prescription drugs, supporting supply chains in the U.S., and implementing campaign finance reform.

Challenging Slotkin is Republican state Sen. Tom Barrett (R-Charlotte). He’s an Army veteran who has served in the Michigan Legislature since 2015. At a bar in South Lyon called the South Lyon Hotel, Barrett brushed shoulders with residents at an early October campaign event, serving them drinks.

He pointed to high inflation numbers and rising crime rates and said he wants to help working families in the district who think the country is on the wrong track under Democratic leadership.

“All my campaign has to do is remind people of reality that's actually happening, that's actually out there," Barrett said. "We have a far more compelling message to voters, and they will respond to that, and we will win on election day.”

Like Slotkin, Barrett has also been touring the 7th District, visiting small businesses and making campaign stops to introduce himself to new voters.

"I'm, you know, thankful that people have been really welcoming and encouraging in every part of this district we've gone to, you know, we're going to compete hard. We're going to run hard. This is going to be a close race."

He’s trying to challenge Slotkin’s image as a moderate. And if elected to Congress, he says he wants to address the cost of living, the opioid crisis, and border security.

MSU’s Matt Grossmann says Barrett’s experience representing part of the district as a state senator could help him gain an advantage.

“He is fairly well known and does not have the same kinds of problems that some Republican candidates have had this cycle of, sort of, starting from inexperience,” Grossmann said.

According to the Federal Election Commission, Slotkin had about $3.8 million on hand and Barrett had $118,000 as of Oct. 25.

Also looming over the race is the issue of abortion rights. After the U.S. Supreme Court overturned Roe v. Wade, voters motivated to support abortion rights have been energized. Slotkin says she wants to protect access to abortion.

Barrett opposes abortion rights. He declined to explain whether he supports exceptions for rape, incest, or when the mother’s life is at risk beyond his statement, that he is "pro-life and that includes the life of the mother.” He says he advocates for supporting crisis pregnancy centers.

There’s a ballot proposal in Michigan to enshrine abortion rights in the state constitution. That could help Democrats like Slotkin overcome the Republican wave that’s expected with President Joe Biden in office.

There’s also a Libertarian Party candidate, Leah Dailey, running for the 7th District. In a close race, a third candidate taking in votes could determine who wins.

Ultimately, with both candidates running on their political records, Grossmann says whoever wins this race will really depend on how voters perceive the ideologies of both Slotkin and Barrett.

"I think Elissa Slotkin really did benefit from being seen as a moderate in prior elections," Grossman said. "It's not clear that that will be the case in this election. And Barrett, although quite conservative in terms of his voting record, I think might benefit from sort of not being equated with the Trumpiest parts of the Republican Party.”

But they have limited time to make their case to voters in this new district, and many absentee ballots have already been sent out. 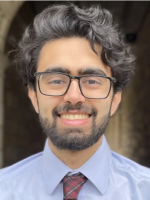 Arjun Thakkar
Arjun Thakkar is joining WKAR as a new politics and civics reporter after stints at the Detroit Free Press and Bridge Michigan. He’s also a recent graduate of the University of Michigan.
See stories by Arjun Thakkar
Latest Stories
Related Content