James held a roughly 1,600 vote advantage over Marlinga out of more than 300,000 ballots cast in the largely Macomb County district.

Marlinga conceded the race to James rather than call for a re-count. He said it would not be worth it without evidence of discrepancies in the vote totals.

But the military veteran and business executive found traction with some voters by promoting GOP policies like cutting tax rates and promoting energy independence for the U.S. 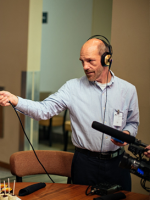