Ice boating: 'The most fun you can have with your clothes on' | Michigan Radio
WUOMFM
Related Program:
Stateside

Ice boating: 'The most fun you can have with your clothes on' 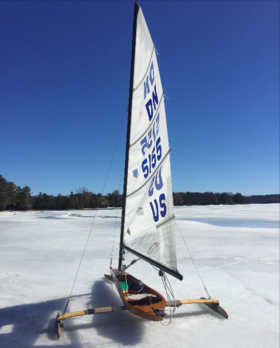 Even though Spring is here, the ice on is still 12 inches thick on some inland lakes. Because of this, you can see ice boats cruising along the ice on West Grand Traverse Bay or Lake Leelanau on a clear, windy day.

Their sails are propelled by wind like normal boats, but these crafts face no friction from waves or currents. They can move at three or four times the speed of wind.

“I'm sure motorcyclists say the same thing,” says Hill. “It's the most fun you can have with your clothes on. It's adrenaline. If you're going 40-50 knots across the ice, everything else just melts away.”

Hill is one of several dozen ice boaters in the Grand Traverse region. He also manages the Facebook page called Leelanau Cruisers and Sparbenders, a forum for local ice boaters to share weather conditions and plan their next excursions.

He says his father introduced him to ice boating when he was a teenager.

“I thank my dad for that, sometimes I curse him, because it can consume my life,” says Hill.

Hill says the sailing mechanics are similar to a soft-water sailboat. Each boat weighs somewhere between 60 and 110 pounds and sits on three runners with blades like ice skates.

The front runner is used to steer the boat. The oblong cockpit sits on a plane which is perpendicular to the back runners.

By late March, Spring has arrived with birdsong and warming temperatures. On a sunny Monday morning, the ice boaters have pulled off M-22 at a spot on northern Lake Leelanau. The forecast called for wind speeds of 15 knots, but it hasn't arrived yet.

Hill knows that this week could be his last of the year for ice boating. 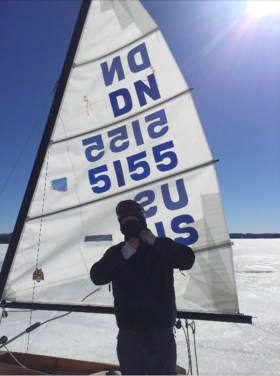 “When conditions are right, on this part of Lake Leelanau, you see a car coming out of Leland and basically race it. Some days you're overtaking the car, some days just keeping up with it,” Hill says.

They know that if they wait too long, the spring sun will melt surface ice and slow down their boats.

“Today is a race between the wind and the sun,” Hill says. “Under the sun, the first half inch becomes like a snow cone, putting your brakes on the boat.”

Just then the wind picks up and he seizes the opportunity.

“That's where I'm headed—to the other side of the lake,” Hill tells a fellow ice boater.

He stands on the boat with one foot and pushes off with the other.

The runners make a low rumbling sound as they move along the ice. The boat's lines begin to flap. The sail catches and fills with wind, then he's off, headed onto Lake Leelanau.

Hill is on the lake today with four other ice boaters. Because the sport can be dangerous, he says you never boat alone.

Hill wears a helmet, padded clothing, safety ropes and a lanyard around his neck with spikes. He could use those as hooks to pull himself back on the ice if he ever went into the water.

That hasn’t happened yet, but he has been catapulted from the boat when wind conditions changed quickly. One of his buddies hit open water on West Grand Traverse Bay a few years ago and had to call 911 for help.

“You're really at the mercy of it out there,” Hill says.

This story was featured on Points North. You can find the full episode here.