The State of Michigan is weighing whether to open the door to commercial fish farming in the Great Lakes.

Millions of rainbow trout are raised for food by Canadians every year in Lake Huron and promoters of the business say Michigan should follow suit and could even become a world leader in aquaculture.

State officials are trying to figure out what the risks are and the idea is likely to face opposition from sport fishing groups and other conservationists.

The geography in Lake Huron’s North Channel is superb for farming fish. The water’s cold and clean and at one site owned by Cold Water Fisheries it drops off to a depth of 80 feet within 500 feet of shore.

“You can live through four to six foot waves,” he says of net pens. “You don’t really want to see anything bigger than that, but you also don’t want to be too sheltered because you may be in a situation where you don’t have the proper water flow.”

There are seven net pens on either side of the dock, each about 50 square feet. This one farm produces about 800,000 pounds of fish every year.

Before he started Cold Water Fisheries, the owner, Robert Devine, was a cattle farmer. He says it would take him more than 1,500 acres of land to produce that much beef. The dock and nets here take up less than five acres of water.

Rainbow trout are grown to around three pounds before being processed into filets at a processing plant in Little Current. Cold Water Fisheries employs about 45 people in the town of 1,500.

Robert Devine would like to open more farms here or expand the ones he has but he can’t get a permit from the Province of Ontario. He says he’s been trying for more than a decade. 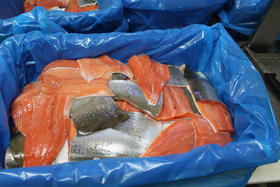 “I try and ask every quarter if they could give us a report of what they found that would tell us that we’re doing something wrong,” he says. “I never had one thing cross my desk.”

IPR’s multiple requests for an interview with Ontario’s Ministry of Natural Resources were not successful.

Devine says other than First Nations, nobody in Ontario has been able to expand recently. That’s why he is hoping Michigan will open its side of the Great Lakes to net pen aquaculture. He has been in conversations with a group in the Upper Peninsula looking at the Bays de Noc near Escanaba.

Allen raises shrimp and is on the board of the Michigan Aquaculture Association. But his farm is indoors in Okemos.

One of the big concerns with fish farms is the large number of fish going to the bathroom in the same place. Fish waste has phosphorous, a nutrient that plants need but when there is too much in a lake it can fill with weeds and algae. In extreme cases, it can cause the growth of toxic plant life.

Russ Allen says we’ve spent 50 years making rules for farmers and cities to keep waste out of the lakes.

“This one endeavor with net pens in the Great Lakes would be essentially the only permitted entity to be able to put raw sewage into the Great Lakes,” he says.

Fish farmers say it’s unfair to compare fish waste to sewage, because fish belong in the lake. Cold Water’s manager Tom Horn says his farm has been running for 20 years and has done no harm.

In Michigan, officials are forming a panel of experts to review all the science about freshwater aquaculture. The names of members of the panel could be announced in early June.

Nutrient loading isn’t the only issue. There are also questions about the risk of disease and what happens to wild rainbow trout if a farm has a problem and thousands of genetically inferior fish escape.

Michigan Steelhead and Salmon Fishermen’s Association is against any aquaculture out in the Great Lakes. Shrimp farmer Russ Allen thinks a lot of the general public will also be opposed.

“Look at the way people reacted to just the thought of having windmills off the shore,” Allen says. “I’m not sure they would really like the idea of net pens floating out in front of their cottage.”

A new frontier in applied science

Promoters of the industry say Michigan can show the world how to develop freshwater aquaculture.

Kent Herrick runs a nonprofit near Ann Arbor that has experimented with raising perch. He wants to see a large-scale fish farming industry out on the Great Lakes.

“Because we have such a strong regulatory structure and a strong academic community,” he says “We’re going to do this in a responsible development way and can study it thoroughly.”

He says there are parts of the world that would benefit from a growing body of scientific knowledge, like Africa, where they farm fish out of necessity.

“They’re expanding their fish farming at phenomenal rates and trying to do it in a sustainable way but they really have to do it because they have to feed themselves,” he says.

Herrick’s an engineer and his family owned a large manufacturing company— Tecumseh Products—for a few generations. He doesn’t think Michigan will return to its manufacturing roots and that’s why he’s interested in growing fish.

“What do we really do next?” he asks. “The thing that always stands out is the water.”

Officials in Lansing are trying to figure out if there’s a place for fish farms out in that water. Dave Fiedler at the DEQ said in an email that their primary job will be to protect the lakes from “undue risk” and the bar will be set “very, very high.”