Read to this barber, get a discount on that mohawk | Michigan Radio
WUOMFM

Read to this barber, get a discount on that mohawk

Most kids will head back to school this week ready to learn. But some will have to spend a good chunk of time re-learning things they forgot over the summer. The dreaded “summer slide” has been linked to persistent achievement gaps between kids from lower-income families and their better-off peers.

Here's how The New York Times describes what happens when a kid's brain takes a break during those summer months:

A study from Johns Hopkins University of students in Baltimore found that about two-thirds of the achievement gap between lower- and higher-income ninth graders could be explained by summer learning loss during the elementary school years.

This learning loss is cumulative, summer after summer. It has a tremendous impact on students’ success, including high school completion, post-secondary education and work force preparedness.

Kids and parents have to make an extra effort over the summer to keep the brain engaged with things like more trips to the library, flashcards, or camp (which can cost a lot of money).

In Ypsilanti, parents can get a little extra help in combating the summer slide when they visit their barber at the barbershop. That's right. The barbershop.

The Fuller Cut in Ypsilanti has a special "Read to the Barber" program for kids. Here's how it works: kids pick a book from one of the light green tables in the waiting room, and when it's their turn to hop into the barber chair, they read the book out loud to the guy snipping and cutting and shaving their hair. In return, they get $2 off their haircut, or they can pocket the $2 for themselves.

Ryan Griffin’s been cutting fades and tapers and mohawks for 20 years, most recently at the Fuller Cut. He says he first read about a similar literacy program at a barbershop in Harlem, so he asked his boss, Alex Fuller, if they could replicate it. Fuller said sure, and within a few weeks they had folks donating books to the cause.

"It's just being responsible," says Griffin. "We want to be more than just a place where people can come get a haircut." To that end, he takes the reading program very seriously. Kids in his chair can't just read the book and be done with it. Griffin quizzes them at the end to make sure they understood what they just read. It's one thing to be able to read the words on the page, but comprehension, he says, that's "the big thing" he works on with his pint-sized clients.

"We get complimented by teachers that will say it does so much for these kids throughout the summer or throughout the school year," says Griffin. "You know, maybe someday some kid will grow up and be a journalist, be a writer, and he’ll say. 'You know what? When I was young, my barber used to make me read.' So whatever we can do to help shape these kids."

(Subscribe to the State of Opportunity podcast on iTunes, Google Play, or with this RSS link)

Keith Jason brings his two sons, seven-year old Jozef and six-year old Joziah, to this barbershop specifically because of the reading program. He used to go to a competitor nearby, but Jason says once he heard about the literarcy program, he switched allegiances:

"Being a father and knowing that I can bring both of my sons in and get a discount off of both of their haircuts where all they have to do is read to the barber, it’s an amazing thing. It’s helping my pockets, it’s helping their education, and it’s helping prepare a better future for them, so I love it."

They dropped by the barbershop this particular weekend because school's about to start and school pictures are only a few days away. Jozef wants a mohawk that's "high on the top and short on the bottom, with lines that go in a diagonal line where the top is going to be." So he hops in the barber chair, puts his smock on, and reads "We're Going on a Lion Hunt" while the barber shaves and snips the mohawk into shape.

Most of the kids who participate in the Read to a Barber program are young black boys like Joziah and Jozef, and the book selection reflects that; books about black baseball players and black kid detectives make up a lot of the books. There are no hard numbers as to how many kids participate, but the barbershop owner estimates that more than 100 kids have come in and read to the barbers over the past year, some more willingly than others. 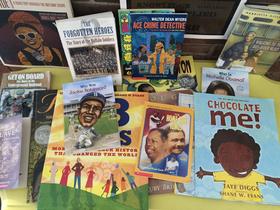 Georgio Pitts, 9, is going into 5th grade this year. He doesn't seem super enthusiastic about reading. His dad says Georgio would rather play video games, but he makes his son grab a book all the same. His pick? Home Run Kings. He may not love the reading part, but the part where he gets two bucks from the barber to put in his piggy bank? That part’s pretty great.

Tags:
Back to School Series
ShareTweetEmail

College expenses are rising. There’s no doubt about that.

Trying to pay for tuition, books, a place to live and more can stretch a budget to its breaking point.

Olivia Johnson, a criminal justice student at Ferris State University, knows that struggle, and she’s seen it on campus.

That’s why she started the Student Emergency Food Pantry for Ferris students this year.

Proponents of publicly funded, privately run charter schools hail them as the way to keep public schools and public school teachers "on their toes" by creating competition.

Here in Michigan we have roughly 145,000 students in more than 300 charter schools, according to Education Trust Midwest.

And a report that group released earlier this year showed that charter school enrollment in the 2014-2015 school year consisted of disproportionately minority and low-income students.

This morning I sent my daughter off to her first day of third grade.

She was excited to go. She was ready to see her friends, and genuinely loves school.

But I'm sure she'll be less than thrilled once her teacher starts assigning homework. Like many kids, I'm sure she'd be happy if homework was simply eliminated.

That will be a reality this school year for more than 500 kids at a Massachusetts elementary school.

There are frequent and spirited discussions about students who aren’t getting what they need to succeed in Michigan’s public schools.

Nanette Janecke of Western Michigan University is adding another group of students to that conversation: gifted students.

They’re students who could achieve a lot, but who – in most Michigan school districts – aren’t given many tools for success, Janecke said.

When it comes to special education, where you live matters

As kids head back to school, it’s worth remembering that all kids have the right to a free education.