Which students are more likely to end up in a crowded classroom? You can probably guess. | Michigan Radio
WUOMFM

Which students are more likely to end up in a crowded classroom? You can probably guess.

How many kids are in a typical classroom in Michigan?

That’s a tough question to answer. And believe me, we’ve tried.

But a new report from the Gerald R. Ford School of Public Policy at the University of Michigan gives a clearer picture of class sizes in Michigan’s public schools.

Researchers collected individual student data on 1st, 7th, and 9th graders from across the state and used that data to compare class sizes in different public school districts. They compiled that information into a handy database that lets you search and compare districts based on class size. (You can find that tool here.) 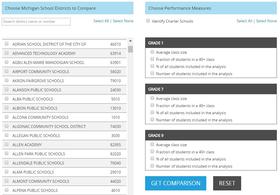 The Michigan Department of Education has data on college readiness, third grade reading levels, and graduation rates. But if you go looking for average class sizes, you’ll end up empty-handed.

What it does keep track of is something called the student-teacher ratio.

That’s because not all the teachers included in the student-teacher ratio are actually in front of a classroom. Reading specialists and special education teachers, who work with a much smaller number of students, are thrown into the mix, too. Which means classrooms in pretty much every school district are more crowded than they seem.

According to the report, 95% of Michigan 1st graders are in classrooms with more than 18 students. In 7th and 9th grade, that number grows to 98%. There are some students that are significantly more likely to find themselves in a crowded classroom than others, though. 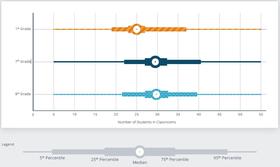 If you’re a minority student or from a low-income family, you’re probably going to have more kids in your classes. And you’re more likely to be in an “especially large class,” which the researchers define as having 40 or more students.

Black students, in particular, are at a much higher risk of ending up in crowded classrooms. According to the report, a quarter of black 9th graders are in classrooms with 40 or more students for at least one core academic subject (English, Math, Social Science, or Science).

That’s twice the rate of Hispanic and Latino students and more than three times the rate of white students. And the difference is true for younger students, too. 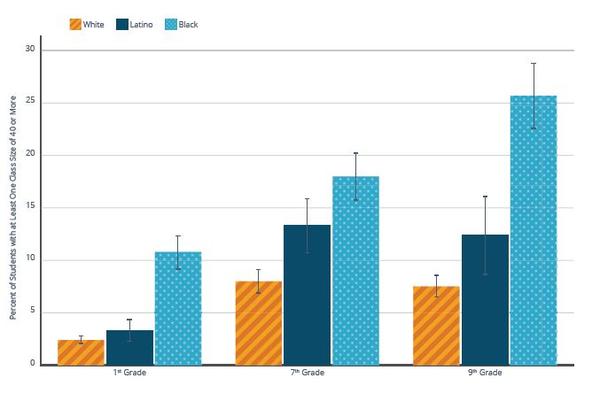 Kids who are eligible for free or reduced lunch, regardless of race, were 60-70% more likely to be in large classes.

Where you live matters, too.

Ninth grade students in urban districts were 12.5 times more likely to be in a large class than those in rural districts. Suburban students fell somewhere in between. 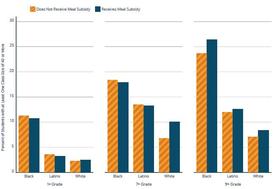 The effects of race, income, and location of schools held steady even when controlling for other factors. Schools with high poverty rates had bigger class sizes whether they were in rural, suburban or urban districts. Black and Latino kids were still more likely to end up in large classes, whether or not they received meal subsidies.

One thing that didn’t seem to impact the likelihood of ending up in a crowded classroom was whether you went to a charter or a traditional public school.

According to the report:

“Though the differences between charter and traditional public schools are much-discussed, we find little evidence of a systematic difference between the two sectors in terms of risk for students of finding themselves in at least one class with 40 or more students.”

So, why does all of this matter?

It’s not just about how close your desk is to the next kid’s.

And the benefits extend into adulthood, too.

A 2011 study from Sweden found that a smaller class size in primary school led to higher earnings later in life. For low-income and black students, smaller classes have an especially big impact.

The evidence that small class sizes are better for students has led some states to limit how many kids are allowed in a classroom. But Michigan isn’t one of them.

Some teacher's unions have negotiated limits on classroom sizes, but there is no state law that caps classroom sizes. And when a school is under a budget crunch, increasing the average class size can save a lot of money.

According to the Brookings Institute:

“Increasing the pupil/teacher ratio in the U.S. by one student would save at least $12 billion per year in teacher salary costs alone, which is roughly equivalent to the outlays of Title I of the Elementary and Secondary Education Act, the federal government’s largest single K-12 education program.”

Researchers from the Ford School say that since there’s no cap on class size, it’s especially important for Michigan to keep track of how many kids are ending up in overcrowded classrooms.

The Ford School researchers used a database called the Teacher Student Data Link database. It lists courses, sections, teachers, and grade performance for individual students. The state recently announced that starting this year, it will no longer collect full transcript data for every student.

Which means the student-teacher ratio, with all its flaws, might soon be the only tool for estimating class size in Michigan.

Teachers tell us class sizes are getting bigger in Michigan

We're going to go out on a limb here and say most parents want to know how their child's school measures up in terms of standardized test scores, graduation rates, demographics and so on.

Another big question parents ask when looking at a school:

“How many kids are in a typical classroom?”

When you hear people talk about ineffective school systems, you’ll often hear something like, “there aren’t enough desks or books,” or “there are more than 30 kids in that classroom.”

Nearly two months into the school year, more than a quarter of Detroit Public Schools are reporting overcrowding issues in some classrooms.

That’s according to an annual survey by the Detroit Federation of Teachers. The union’s contract caps class size at 35 students.

Some schools reported classrooms with more than 50 students. Some also reported lacking supplies like textbooks.